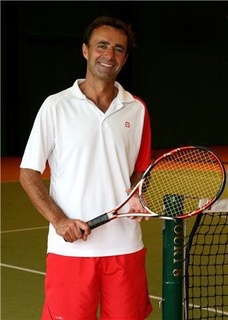 Patrick joins us with a wealth of experience across a range of settings and is passionate about helping tennis players maxmise their playing potential be that at a competitive level, playing socially or maintaining fitness and well-being.

A level 4 licensed tennis coach, he has developed a concise and flexible coaching philosophy which enables him to coach from the inside out so the learning experience is all the more valuable and meaningful.

Patrick’s former roles have included head of tennis at Woldingham girls school for 12 years, head of junior program at Esporta, coaching his brother to Surrey county cup captain in group 1. He has also been mentored by an LTA coach to a former British no 2 player.

Altogether Patrick has over 30 years full time experience in the game and helps tennis players with the psychological side of the tennis too - this approach keeps players interested, engaged and able to fulfil their own goals.

Please do not hesitate to contact Patrick for coaching enquiries or if he can help you in the improvement and enjoyment of tennis! 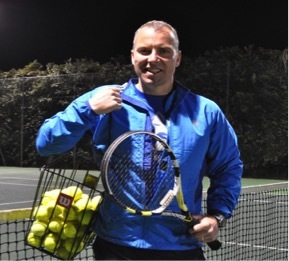 George has over 25 years’ experience coaching all levels of players.

He has been Head coach here at Woldingham LTC over the same period as well as holding Head coach roles at various venues across Surrey and Kent at different times, whilst successfully managing and running a team of coaches, coaching at  multiple clubs and venues throughout parts of Surrey and Kent, alongside running a club pro shop supplying and selling all sorts of tennis related merchandise.

During this time he ran a Tandridge wide community tennis scheme at various venues such as schools and parks offering opportunities to play and receive coaching for juniors and adults across the Tandridge district. The scheme also provided for those with various disabilities to play tennis including wheelchair tennis as well as tennis for special needs players. The scheme was very successful and attracted coverage from the national tennis press. It also benefited from the support of ex British number one Mark Cox who was commentating for the BBC at that time, by way of a series of clinics that George and Mark conducted across the district on a very busy and carefully coordinated day, where tennis coaching was provided free to all the many people who turned up at each venue, with the support and coverage of the local press.

George was also team coach for the  Sutton borough junior tennis squad and a member of the LTA pool of coaches, coaching at main events during the grass court season, like the Beckenham tournament and also Wimbledon, when on the middle Saturday he had the opportunity to coach local children alongside various ATP players who were competing at Wimbledon.

He also has a track record helping players to become coaches as well as training and mentoring various coaches over the years and has a keen interest in sports and performance psychology and has studied nutrition at the Institute of Optimum Nutrition.

George is a qualified and experienced stringer, although these days seldom has the time available to string for members.

George’s ethos and philosophy is simply; “no one knows how good you can be” and his focus is always on, fulfilling the potential in you, to be the best you can be, at any level.

George believes that the tennis court is somewhere we can learn and cultivate many skills, not just for tennis, but also for life.

His passion is to see people experience the fun and enjoyment of such a wonderful sport that really can be a sport for life. 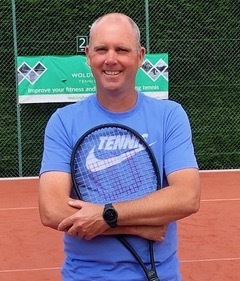 Richard has successfully coached adults and juniors for over 5 years at Woldingham Tennis Club.

Richard is an LTA, RPT, PTR and USPTA qualified coach with over 25 years experience as a coach and nearly 40 as a player.

He has coached at all levels from Mini Red to US Collegiate, adult beginner to UK National Tour here in the UK, at International academies in   Bahrain and the UAE and numerous hosting of Active Away tennis holidays in Spain, Italy and Greece among others.

In addition to this Richard also holds a diploma from SAQ International specialising in speed, agility and movement.

Off-court he has been tournament referee for numerous junior events and assistant referee at the St Georges Hill annual tournament under Wimbledon referee Andrew Jarrett. 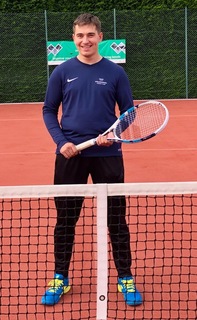 James is an LTA Level 3 tennis coach and is available weekdays Tuesday to Fridays and Sundays for group lessons throughout the day and evenings.

James brings to Woldingham great enthusiasm, which comes across in his coaching, encouraging younger children and teenagers to enjoy the sport of tennis. James ensures that everyone is learning and having fun whilst on court and likes to approach lessons which allow for good learning techniques for players to understand. James is always wanting to provide good technical and tactical ideas for competitive teenagers, he is always developing future plans of his own from players feedback. James puts together structured tennis plans that are both geared towards improvement and enjoyment.

James has studied Advanced Level 2 Diploma in Sport and competed in LTA tennis tournaments. James’s is looking to continue to develop his tennis coaching skills and increase his LTA levels of coaching to provide him with an enjoyable, rewarding and fulfilling career.

Contact us today if you are interested in finding out more about our club either as a player, official, coach or volunteer. To pay your subscription now, click "About Us" and then click "2022/2023 Membership Information and Fees".

Details of Data Controller are